The proposed strategy is not consistent with the Climate Action and Low Carbon Development (Amendment) Act 2021.

A reduction in emissions of 35% over 2018 levels by 2030 proposed in the Strategy is not consistent with the national climate objective, and when taken with 2030 targets from other draft plans published by the Authority in 2022 (Greater Dublin Area: -37.5%; Waterford -26%) raises questions of how the Authority is performing its functions consistent with the provisions of the Climate Action and Low Carbon Development (Amendment) Act 2021.

The proposed strategy is not consistent with the National Planning Framework 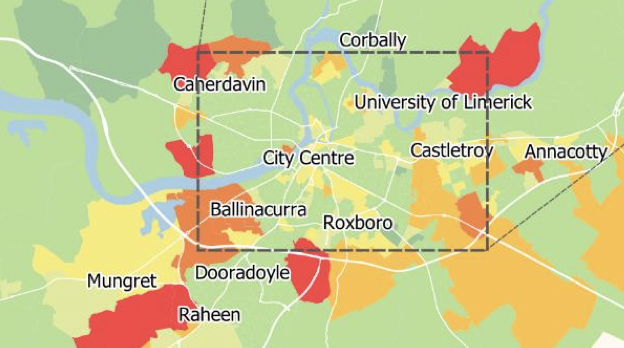 The Modelling Report notes that “The NTA, in association with Limerick City and County Council (LCCC) and Clare County Council (CCC) prepared a Planning Datasheet for the 2040 Land-use Scenario for the application within the LSMA Transport Strategy. This Planning Datasheet has been used as the baseline land-use scenario for all modelling of the strategy options and preferred strategy.”. This planning data sheet assigns the majority of population growth in a ‘doughnut’ arrangement on greenfield sites at the periphery of the city. This is in direct contravention of the policy outlined in the National Planning Framework where 50% of growth in regional cities will be developed within their existing built-up footprints. Furthermore, concrete plans being progressed by state agencies (e.g. the Land Development Agency’s plan to deliver over housing for 6,000 new residents on the lands surrounding Colbert Station) have been ignored in the proposed Planning Datasheet.

National Policy Objective 3b
Deliver at least half (50%) of all new homes that are targeted in the five Cities and suburbs of Dublin, Cork, Limerick, Galway and Waterford, within their existing built-up footprints
– National Planning Framework

The National Sustainable Mobility Policy sets out a target of a 10% reduction in kilometres driven by fossil fuelled cars by 2030. The Strategy proposes an increase in road capacity through the fact that it “commits to delivering the N/M20 Cork to Limerick Scheme and the N69/M21 Foynes to Limerick Road” as well as proposed roads to open up development lands in the suburbs. The Strategy fails to address any induced demand that will be caused by these projects in the Limerick Shannon Metropolitan Area. Outside of the city centre area, the Strategy fails to identify any measures that could reduce road capacity that would result in traffic evaporation.

Targets
To deliver at least 500,000 additional daily active travel and public transport journeys and a 10% reduction in kilometres driven by fossil fuelled cars by 2030 in line with metrics for transport set out in the Climate Action Plan 2021
National Sustainable Mobility Policy

The Authority published an excellent consultation as part of its work on the Cork BusConnects project which outlined two fundamental issues relating to bus network design: the tension between coverage and ridership; and the importance of interchange in providing a coherent public transport network that can deliver modal shift. Unfortunately the proposed bus network for Limerick consists of a series of meandering routes optimised for coverage with few interchange possibilities. Exacerbating this is a proposed traffic arrangement for the city centre which insists on directing buses through O’Connell St, away from the bus and rail station and preventing effective interchange between services.

A well-connected network is key to high patronage. Interchange must be easy and reliable so that people can reach many destinations in a reasonable amount of time, at a reasonable cost.
Bus Network Redesign Volume I: Choices Report – BusConnects Cork