On Worst Case Scenario, the podcast I host with Baz Taylor and Dave Sims, we use a WordPress plugin called Seriously Simple Podcasting to host our podcast feed. It’s a fantastic minimalist plugin with little bloat and works very well for us.

We also installed an add-on called Seriously Simple Stats which would give us download counts for each episode of the podcast.

However the plugin wasn’t showing the client information properly and this was annoying Dave.

The three of us poked at it at various points during the day, and despite not being WordPress experts (and in my case, being very far from a PHP expert), we managed to get it working.

Here are some user agent strings reported by one or two podcast apps:

Hm. There was no entry for AppleCoreMediaPlayer, which was why downloads from the native podcast app were being detected as ‘Other’. But we tried downloading episodes from iTunes on the Mac and that was still recorded as Other.

In fact, apart from plays from the website, every client was being recorded as ‘Other’ – except for Pocket Casts. What was going on?

When your needle and your haystack are the same size 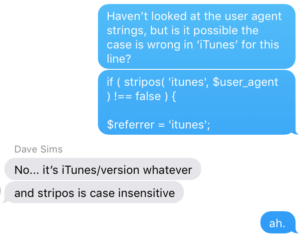 The stripos($haystack, $needle) function in PHP looks to see if a string $needle is in the string $haystack, if it is, it returns an integer with the position of $needle in $haystack, otherwise it returns false.

Absentmindedly, I typed ‘php’ in a mac terminal expecting to get an error, but instead getting a blank prompt, indicating I could type PHP code enclosed in <?php ?> and hit ctrl-D to make it run (why does OS X ship with PHP? I have no idea). I tried a smaller test case:

Those of you reading probably have the aha! moment by now, but it took a bit of probing from Baz before I got it:

And that was also the reason why Pocket Casts was showing up correctly – because the entirety of the user agent string is “Pocket Casts”!  Anyhow, changing the function around to read

and adding AppleCoreMedia to the list got everything working fine. Well almost.

We then hit another problem:

Being lazy I just added a return statement if we detected the Podcasts user agent:

I submitted it as a pull request and the maintainer merged it within a few hours. It was fun chatting away with Baz and Dave on iMessage while we tried to fix it.